Driving in to work early one Thursday morning my thirst was such that it needed quenching.  I banged a right into the local Cumberland Farms convenience store, running over a curb, nearly losing the front fender of my 1986 Isuzu Pup.  The thought of the cold, crisp tartness of an Ocean Spray cranberry juice coating my throat was simply irresistible and if I had to lose a fender to get one…it would be well justified.

After purchasing the tarty greatness and consuming the entire bottle in nearly one gulp, my body seemed somewhat rejuvenated.  Little did I know that the events that were about to take place would in fact haunt me for the rest of time.

Stopped at a red light, the first of many I should say, the feeling of impending doom began to set in.  My abdomen began to spasm, a tingling sensation had taken over all four of my major extremities.  Sweat began to pour down my face like the rains down in Africa.  I was disoriented and slightly short of breath.  Could this be a reaction to that tasty beverage that I had just consumed?, I thought.  As the light turned green, I could barley feel my foot hitting the gas pedal, with every push of the pedal the tingling worsened.

Should I go to the hospital? Should I pull over? Should I continue on this journey to work? These types of thoughts consumed me, but I knew I needed to press on and make it to work on time.

The rumbling worsened, the salt from my sweat was now interfering with my vision as it dripped into my eyes.  I felt as though I needed some sort of release, a release of gas perhaps…that turned out to be one of the worst ideas I have ever had. 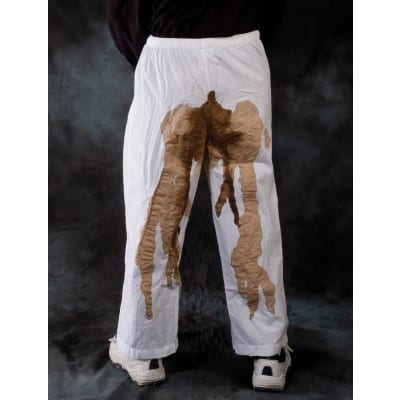 As I slowly opened my anal cavity there was an explosion…the only thing I can compare it to is an I.E.D. being set off in the top of a Hawaiian volcano.  Moist, warm feces began to fill my tighties and my foot hit the gas…only to be followed by the brake due to yet another red light. Cars surrounded me, I could not pull over, I could not back up and mini explosions began to take place in my pants.  There are no diapers nor undergarments available today that could carry or take on a load such as this.  All my windows immediately went down, the air was thick and I was gasping for a breath of fresh air.  The waistband of my pantaloons was stretched to its limits and eventually being breached by the muddy waters flowing directly from my large intestine.  “Damn you Ocean Spray, Damn you tasty, refreshing beverage”.  On a good note, I did have the rest of the day off.