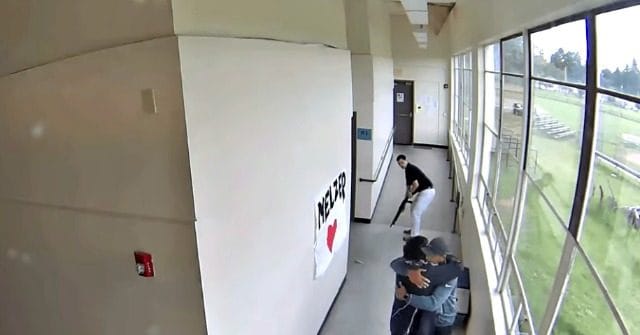 A high school football coach from Oregon is receiving a lot of praise after school surveillance video shows him disarming and hugging a student who brought a loaded shotgun to school.

19-year-old Angel Granados-Diaz walking onto campus at the Parkrose High School in Portland back in May with a loaded shotgun. School surveillance video of that day has just been released by authorities.

Moments after Granados-Diaz can be seen entering a room in one of the campus’ buildings, coach Keanon Lowe is captured entering the same room shortly after. Lowe then exits the room with the gun, which was reportedly loaded with one round, as he guides Granados-Diaz out of the room.

Lowe holds the gun away from the student as he waits for another faculty member to retrieve the weapon. Lowe is then seen hugging Angel for over two minutes, as he comforts the clearly troubled teen.

Lowe has been praised by many for his heroic and sincere actions. There is no doubt that Lowe prevented a great tragedy.

Granados-Diaz has since pleaded guilty to two gun charges and been sentenced to 36 months of probation, according to NBC News.

An Oregon high school football coach was able to disarm a student with a shotgun preventing a possible massacre by talking him down and hugging him.

His name is Keanon Lowe. KNOW HIS NAME! pic.twitter.com/7RtnFyDbSs

This is Keanon Lowe.

He is a football and track coach at a high school in Oregon.

Last May, a student came to school with a shotgun. Lowe disarmed the student and then embraced him.

Parkrose High School football coach @KeanonLowe saved lives when he stopped a student with a gun.

You’ll never believe how he did it.pic.twitter.com/jFegWZtBxW

This guy… you want to be this guy.. in the worst moments in life… this guy is the standard. Amazing.

His name is Keanon Lowe. https://t.co/FvY8IPsDYm

I have not been this moved in a very long time. Impossible to not get emotional watching this. We called him a hero then, but after seeing this I’m not sure there is even a word worthy of him. Thank you, @KeanonLowe. ? https://t.co/HtVNiq7tjf